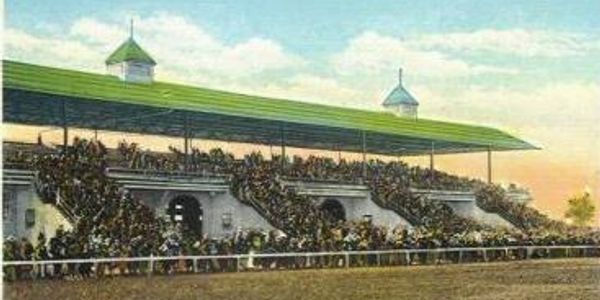 At the time of purchase, the 204 acres of pre-race track land was the wildest of river bottom land. The original plans were to build a track one-mile long (as the Green River Jockey Club wanted one of the longest in the nation). Ernest F. Bohme, a Lexington, KY architect, was assigned to develop the plans for Ellis Park and became confused during development. He brought in sketches with a track 3/8 of a mile shorter than the original one-mile plan. Time was growing short, so the original investor decided to go with Bohme's design.

Although the course was planned and built for Thoroughbreds, its opening race was a Grand Circuit Harness meet on Tuesday, October 19, 1922. On November 18, 1922, the gates opened for the first Thoroughbred meet. Purses for the entire opening meet shaded $62,000.

One trainer, Hanly Webb, was telling local reporters that he was especially keen on one of his soon-to-be two-year-olds. The nearly-black yearling, owned by Mrs. Rosa Hoots, was sired by the great stallion Black Toney and produced by the mare Useeit. "I'm thinking of naming the colt Dade Park," Hanly reported to The Evansville Courier. Instead, Hanly named the colt Black Gold and on May 17, 1924, Black Gold stood a hard drive to win the 50th Kentucky Derby by a half length.

In January of 1937, a monumental Ohio River flood swept through the Tri-State. At its zenith, flood waters reached the track's mezzanine in the main grandstand. The flood line is marked on the wall to this day. Despite considerable flood damage, the track was ready for the opener on August 7 of the same year.

In 1954, the track was renamed to honor the Dade Park's longtime owner, James C. Ellis.

In 1955, the Miller Field in Owensboro was moved to Ellis to become the new Paddock Grandstand and new box seats were added.

When James C. Ellis died in 1956, the torch was passed to his nephew, Lester E. Yeager. Along with his long-time friend and general manager, Charles M. "Brownie" Brown, Yeager ran the facility as track president before passing the baton to Ruth Adkins.

For 25 years, her strong leadership brought more improvements to Ellis Park. In 1957, the film patrol was installed along with a detention barn for post-race testing. By 1960, the new open paddock, walking ring, and jockey quarters were completed. A new clubhouse was built in 1962. Yeager also added on to the Clubhouse to accommodate 1,000 more patrons.

Under Mrs. Adkin's reign, all attendance and mutuel handle records were established. She made countless improvements and expanded race meets to as many as fifty-nine days - an improvement from a mere twenty-nine days. The track was then sold to Roger and Lila Kumar in April 1985.

The Kumars built the Sky Theatre and were proponents of aiding the required passage of legislation that brought inner-track wagering to Kentucky. The inseparable couple sold Ellis Park to Racing Corporations of America in 1989, which, in turn, sold the racetrack along with the Kentucky Horse Center to Churchill Downs, Inc. in 1998.

In November of 2005, a tornado ripped through northwestern Kentucky and southwestern Indiana inflicting significant damage to Ellis Park. The tracks Grandstand Terrace, adjacent to the main Grandstand structure, sustained heavy damage as did the paddock, jockey's quarters, and infield tote board. The tornado destroyed 11 barns in the stable area and caused light to moderate damage to several others. Three of the 158 horses on the grounds died from injuries suffered in the storm. Despite the damage, the 2006 live meet began as scheduled.

In the summer of 2019, Ellis Park was purchased by Ellis Entertainment, LLC - a subsidiary of Laguna Development Corporation in New Mexico - for $11 million. A strong mover and shaker in the gaming industry, LDC has been enforcing a solid future for the Pueblo of Laguna since 1998. They plan to invest over $55 million to the property throughout 2021 including an expanded Historical Horse Racing facility, new and improved food and beverage offerings, and refurbishment of the grandstands, bathrooms, and barns, along with a number of upgrades to both the public facilities and back-of-house operations.

Times and values, of course, have changed since the days of the old carousel paddock, when the starting gate was pulled by mules, horses came and went by train, fans arrived by ferryboat, the judges' stand was adjacent to the finish line, and odds were calculated by hand. But as Ellis Park advances into the 21st century, the track - despite five changes of ownership, barn fires, floods, and a tornado - maintains the warmth, charm, and simplicity associated with its past.