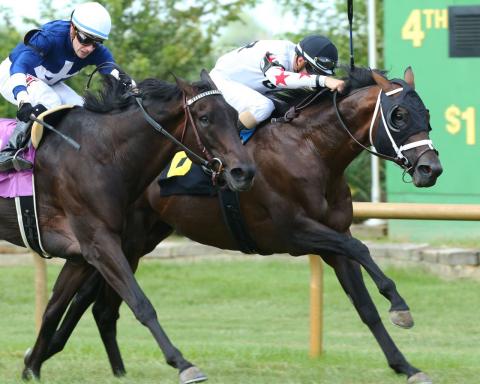 HENDERSON, Ky. (Saturday, Aug. 1, 2020) — Brian and Tom Cutshall don’t want to hear their name called in Sunday’s $100,000 Kentucky Downs Preview Turf Cup unless it’s after the race at Ellis Park. As in the winner’s circle. That’s because the brothers from Minneapolis race as Gaining Ground Racing, but their stable star Factor This likes to run on the front end.

The 5-year-old Factor This definitely is the one to catch, and his 11 rivals will try to reel him in through the stretch. But gaining ground and actually getting past Factor This are two different things.

The Brad Cox-trained horse comes into the 1 1/4-mile Preview Turf Cup off front-running victories in the Fair Grounds’ Grade 3 Fair Grounds Stakes and Grade 2 Muniz Memorial and Churchill Downs’ Grade 2 Wise Dan. Factor This, at 6-5 in the morning line, likely will be the heaviest favorite of Sunday’s five turf stakes comprising Kentucky Downs Preview Day at the RUNHAPPY Summer Meet at Ellis Park. Not only does he come into the race in the best form of the field and possessing the strongest resume, he won the race last year in a course-record 1:59.12 in a three-way photo for his first stakes victory.

“The mile and a quarter is a touch long for him, but he pulled it out by like a nose over a couple of horses,” Brian Cutshall said. “I think that’s where Brad thought maybe we had something if he could improve off that. That’s kind of what happened.”

It’s all heady stuff for the Cutshalls, who claimed Factor This for $62,500 two years ago at Saratoga. Their first three races with the horse were somewhat disappointing, even as he ran against stronger competition. But since then Factor This has won six of 11 starts, including an Ellis Park allowance race last year that encouraged Cox to run him back in the Preview Turf Cup.

Before his current surge, there was a four-race skein where Factor This did not make the lead and did not win the race.

“I think it took Brad and Shaun Bridgmohan a few races to really get a handle on how he likes to run," Brian Cutshall said. "Obviously if he can get on the front end, that’s where he does his best work. But pace makes the race, and sometimes if you get another speed horse (going with you), you’ve got to be careful with that; you don’t want to be going too fast. But we’ve hit some pretty good spots the last couple of races. The Wise Dan was another tough one where he was kind of hooked on the front end. I talked to Brad after the race, and he thought we were going to finish fifth. He really gutted that one out.

“Hopefully he can maintain this. It’s hard to win this many races in a row, so you have to enjoy it while it lasts.”

The Preview Turf Cup winner gets an automatic fees-paid spot in the $1 million Calumet Farm Kentucky Turf Cup at Kentucky Downs, a 1 1/2-mile race in which Factor This was a gritty fourth last year after setting the pace. But this go-round the horse is being pointed for Churchill Downs’ $1 million Old Forester Bourbon Turf Classic on the Sept. 5 Kentucky Derby card — a stakes for which Factor This already has earned a fees-paid spot as the Muniz winner. Cox also believes the Old Forester’s 1 1/8 miles is the optimum distance for Factor This.

The Cutshalls got interested in horse racing by going to the track with their families after Canterbury Park near Minneapolis opened in 1985. Their initial foray into racehorse ownership was brief and unsuccessful. But about five years ago, the brothers decided to get back into the game. They cold-called two young trainers who were starting to make names for themselves. One didn’t call them back. Cox did. They’ve had horses with him ever since, including currently three.

“I think we did a pretty good job identifying Brad as a good up-and-coming young trainer," Brian Cutshall said. "I think it’s pretty obvious we were right.

“We started out claiming a few cheap horses between $5,000 and $10,000," he said. “We had some decent success because obviously Brad knows what he’s doing. But we finally realized after doing that for a year and a half that you really need to get into the more expensive claimers because they all cost the same to train."

Brian Cutshall said he and his brother identify horses they’re interested in claiming and Cox’s team studies the replays, gets a look at the horse and gives a thumbs up or thumbs down.

“You hope they maybe can be competitive in like an allowance-level race,” he said. “But not in our wildest dreams would we have expected this. Yeah, this has been pretty crazy.”

Factor This now has 10 wins, three seconds and four thirds in 29 starts, with most of his $844,070 in bankroll earned for the Cutshalls.

“Being up in Minnesota, this is not horse-racing country,” Brian Cutshall said. “All of my family, our friends, they don’t the first thing about thoroughbred horse racing. My brother and I have tried to explain how crazy it is that we claimed this horse and how well he’s doing. And nobody gets it. I mean, everyone is watching and enjoying it, but they have no idea of the magnitude of how weird it is that you claim a horse like this and winning Grade 2 races.”

And the source of the name Gaining Ground Racing? It’s a reference to long-time Kentucky announcer Mike Battaglia, who signaled horses making a move on the leader in the stretch with “and gaining ground … ”

“That stuck with my brother and I,” Brian Cutshall said, “and that’s literally where we came up with the name: from his calls.”

Botswana put owner-trainer Bentley Combs on the radar last year with a very close second at 36-1 odds in Ellis Park’s $100,000 Kentucky Downs Preview Turf Cup. This time Combs is hoping the 5-year-old gelding puts him in the winner’s circle as he returns to the 1 1/4-mile grass stakes.

Botswana came up just a head shy of wearing down the front-running Factor This in last year’s race. Though he’d just as soon not face him, Combs will get another crack at Factor This in this year’s Preview Turf Cup. Factor This was not the favorite last year but he’ll be a formidable choice this go-round, having won his last three races, all graded stakes.

“He’s doing well,” Combs said of Botswana, who had a trio of seconds in New Orleans allowance races before finishing third in the Grade 3 Fair Grounds Stakes at 51-1 odds. “Obviously he had a bit of seconditis at the Fair Grounds. He had a not-great trip in the allowance race at Churchill (a fifth). That’s when we changed up the equipment. I took the shadow roll off of him for the Laurel race, and he ran probably the best race of his life. Hopefully the arrow is pointing up.

“I don’t think he’s hitting his best stride yet. Honestly, he wasn’t finishing like he used to at the Fair Grounds. I kind of attribute that after the Laurel race to the shadow roll. I broke my own rule of if it ain’t broke don’t fix it. Well, I tried to fix it, and I don’t think I did. So I changed the equipment and he ran a really gutsy race. So I’ll be I’ll be interested to see how he goes into this race with a win under his belt.”

Combs said he was trying to make up the foot or so by which he lost last year’s stakes at Ellis Park when he put on the shadow roll.

“He’s got kind of a rocking-horse type stride to him,” said the graduate of the University of Louisville's Equine Industry Program. “I was hoping to stretch him out as far as the stride goes, and he didn’t close like he used to. He got run down a couple of times at the Fair Grounds, and he finished like his old self at Laurel. Hopefully we can build on that and improve and finish a little better at Ellis.”

Combs said last year’s narrow defeat to a horse who is now a multiple graded-stakes winner was bittersweet.

“To put in that huge of a race, just a nose behind track-record time, yeah it was a great run. But man, if we could have won that one,” he said. “Mixture of emotions.”

On facing off again with Factor This, Combs said, “If you want to see how good your horse is, you’ve got to run him against good horses. Factor This is definitely a good horse. He’s definitely turned it on. That Wise Dan he ran, that was impressive, to have multiple horses come up to him and head him and keep on fight them off. Not to wish ill on anybody, but hopefully he ‘bounces.’ Of course he hasn’t bounced so far, so there’s probably no chance of that. We have to improve and go from there.” 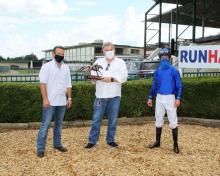 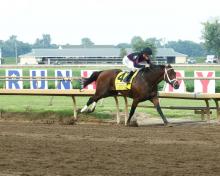 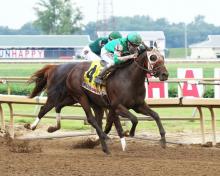