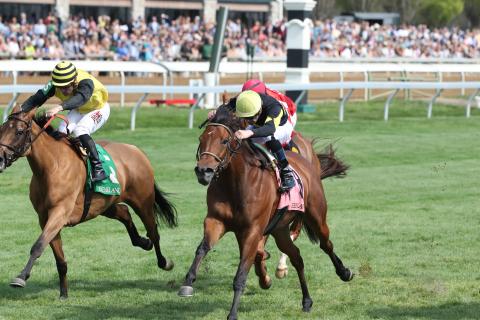 Market Rumor is the kind of runner horsemen love to have in their care. At the age of five, she’s still flaunting her durability and of the eight tracks she has visited in her career, the only venue where she hasn’t registered an on-the-board finish came during her visit to Monmouth Park in August 2020.

While the daughter of Afleet Alex doesn’t need to take her track with her, Ellis Park has been an especially welcoming spot as the site of one of her four career victories. This weekend, Market Rumor returns to that course in search of adding a stakes victory to her achievements when she faces seven challengers - including stablemate Undisturbed - in the $75,000 Ellis Park Turf Stakes Presented by Thoroughbred Aftercare Alliance on July 17.

The 1 1/16-miles Ellis Park Turf will be the first stakes race contested over the Henderson, KY track’s grass surface this meet as last weekend’s opening slate were moved to the main track due to rainy conditions.

Trained by Ian Wilkes for Randall Bloch and Six Columns, LLC et al, Market Rumor has been a dependable presence for her connections, finishing in the top three in 12 of her 19 career starts. She came within a neck of securing that elusive stakes triumph when she ran second in the Old Nelson Stakes at Colonial Downs last August. This season, she captured a salty allowance race going 1 1/16-miles on the turf at Keeneland on April 23, beating Gam’s Mission who would return to take the Old Forester Mint Julep Stakes (G3) at Churchill Downs on June 5 while Market Rumor finished seventh.

“She’s an honest filly, she tries hard all the time,” Wilkes said of Market Rumor. “She’s been second in a couple stakes so it would be nice to finally get that stakes win for her. That would really help her resume. She’s tactical. She’s handy, she can drop back a bit and can really judge the pace on what it’s doing. She is very versatile.”

That ability to adapt to her circumstances was showcased by Market Rumor last summer when she rated midpack in an allowance optional claiming race at Ellis before sweeping by rivals en route to a two-length win. When she finished seventh in the Mint Julep Stakes last month, it marked just the second time in her last nine starts she had been outside the top three.

Bred in Kentucky out of the Street Sense mare Taylor Street, Market Rumor has career earnings of $352,183. She will have Chris Landeros in the irons when she breaks from post No. 4 on Sunday.

The only other horse in the Ellis Park Turf lineup with a prior win over the course is Market Rumor’s barn mate, Undisturbed. The 5-year-old daughter of Lea scored both of her career victories at the Pea Patch, breaking her maiden there going 1 1/8-miles on the turf last Aug. 7 and returning for a one-mile allowance win last September.

Undisturbed has been winless in five outings since that trip to the winner’s circle with her most recent effort being a fourth-place finish in the 12-furlong Keertana Overnight Stakes at Churchill Downs on May 28.

“Undisturbed is 2-for-2 (at Ellis) and she seemed to like the speedier track. Speed holds for her there and that helps,” Wilkes said. “I had her entered (in an allowance race) last weekend but it rained and came off so we used this race as a backup. It’s a little tougher spot but she’s been training well so we have to give her a shot.

Undisturbed will get the chance to use her early speed out of post No. 1 on Sunday and will have jockey Florent Geroux at the helm.

Willis Horton’s homebred filly Will’s Secret is the class of the field in term of stakes achievements, having annexed the 2021 Honeybee Stakes (G3) at Oaklawn Park en route to a third-place finish in last year’s Kentucky Oaks (G1). The daughter of Will Take Charge will be trying turf for the first time, however, this weekend and is wheeling back after running third in the Anchorage Overnight Stakes at Churchill Downs on July 3.

The Brendan Walsh-trained Demodog is set to make her first start in nearly as year as she went to the sidelines following a seventh-place finish in the Lake George Stakes (G3) at Saratoga Race Course last July 23. Prior to that run, the daughter of American Pharoah had shown good promise, winning each of her first two career starts over the turf at Churchill Downs last spring.

Veteran distaffer Russian Mafia was sixth in her only start at Ellis Park last summer but comes into Sunday’s test having won two of her last three starts including a victory last time out in the Romacaca Stakes at Hawthorne on June 18. 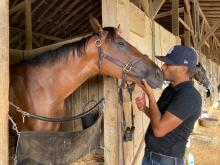 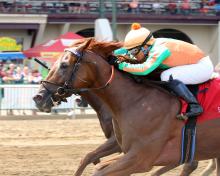 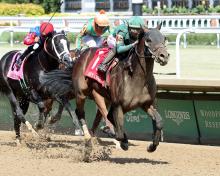